I have been reminded more than once on the DIYaudio forums that this design is NOT a true Ongaku. The true Ongaku was a very well regarded amplifier designed and built in Japan using hand built silver capacitors and transformers. The schematic that I got from the magazine was called an Ongaku, or a "poor man's Ongaku". It appears to have originated from the English Audio Note company. There are also those who claim that the design that I built contained intentional flaws. Others claim that it blew up and fried the power transformer, due to a problem in the schematic. This points to multiple schematics, since I never found any intentional errors and the power supply did work. I built my amplifier from the schematic that is on the CD that was sold on the Sound Practices web site. It is NOT my intention to say anything negative about the original Ongaku design, or the version that was sold by Audio Note UK. I have no experience with either amp.

The O2 (Ongaku 2) is a project that I started well over a year ago and was never finished. It was being built very close to the original schematic which I found in an old Sound Practices magazine. The basic design has been breadboarded on Tubelab. The original Ongaku is a highly regarded amplifier. I have not been happy with the results of the driver section so far (the driver starts distorting before the output stage clips). I have been experimenting with an alternative driver design based on the Simple 45 amp. It turns out that the Ongaku power supply was causing more problems than it is worth, so a new one was designed and built. The current version of the amp no longer resembles an Ongaku, So all future development on this amplifier will be called the 845SE.

So why did I decide to build an "Ongaku" when this web site is all about affordable audio? In one of those warehouse loads of "useless TV tubes" that I purchased I found a box that contained five old 845's and three 211's wrapped in newspaper. Used but mostly good GE, Amperex, and RCA tubes. I bought the Audio Note power transformer from a friend for $35. I won an auction for two "211 - 845 single ended output transformers" on Ebay from Handwound Transformers for about $100. The plan was to build the "poor man's Ongaku" from the design published in an old Sound Practices magazine. I started building the amp but the output transformers never arrived. I put the amp aside, bought some used Sovtek 300B's on Ebay, fixed the 300Beast, and forgot about the O2. Four months and several excuses later the transformers finally showed up. I still haven't made room on my workbench to finish the O2, but when it is done it will be here. 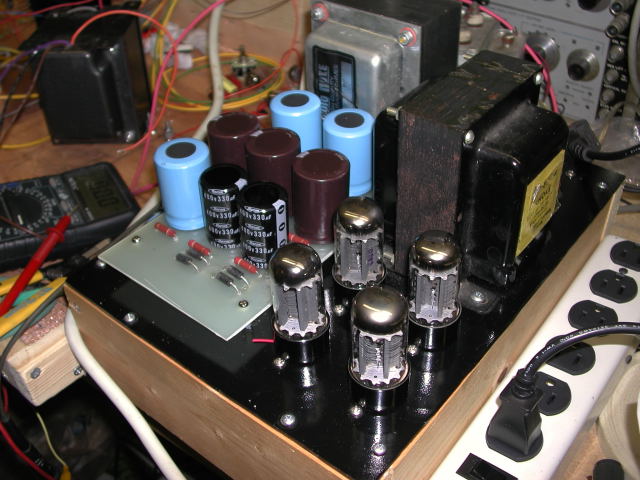 After several months of dust collecting the O2 project has been taken off of the shelf. I finished building the power supply. It was assembled with minimal changes from the original design. One channel of the amplifier was breadboarded on Tubelab. Maybe I have been spoiled by the sound of the Simple 45 amp, but I wasn't impressed with the sound from this amp. After tweaking and modifying on it for a couple of days, I still wasn't happy. Then I came up with an idea. Why couldn't we just drive the 211 (or 845) with a 45 and get the best (or worst?) of both tubes? There is only one way to find out. Build it! 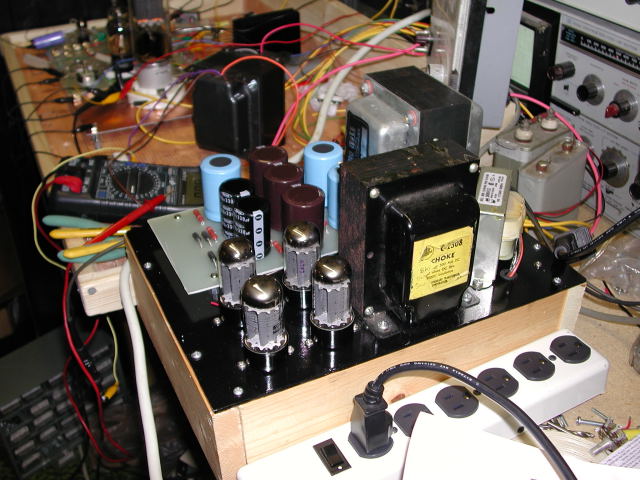 The Ongaku Power Supply with the 845SE breadboard in the background

One rainy Saturday afternoon, a hand full of parts, a Chinese 845 (never experiment with rare or expensive tubes), and I am convinced that the O2 design is dead forever. This thing sounds like a 45 only louder, lots louder. After a few experiments with A2 operation using a mosfet source follower, I am convinced that this IS the way to go.

The amp design that I am currently working on bears no resemblance to the Ongaku design, and those faithful to the original Ongaku design would surely cringe at the thought of current source chips and mosfets contaminating the original design. Therefore all future development on this design will simply be called the 845SE.