I built this test amp for quickly testing freshly assembled boards. It also comes in handy for quickly evaluating different transformers. They can be swapped in about 5 minutes with only a screwdriver. 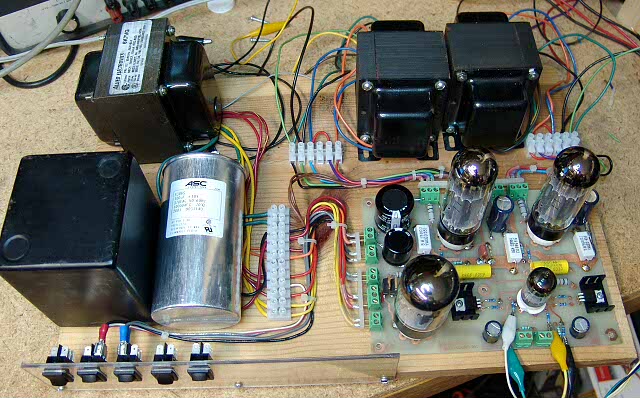 I decided to use the “Coke Bottle” shaped 6L6GC’s made by Shuguang for this testing (amp pictured has EL-34’s) for two reasons. I have previously abused these tubes to over 40 watts dissipation without failure, and they are cheap ($4 each on Ebay). In order to subject the transformers to the most possible power, I cranked the bias up to 80+ mA for a dissipation of over 30 watts. The actual current and dissipation varies slightly since each transformer has a different DC resistance. Even though the tubes are running above the recommended maximum ratings, these seem to handle it well. This set has already served about 4 months of tough duty in a Fender Bandmaster, The owner didn't like them because they were "too clean". They have been sitting here cooking away for hours at a time while I make measurements, without issue. I can get more power from a 6550, but I can't get 6550's for $4, and I don't want to risk frying any of the ones that I have.

I ran the usual frequency response curves because that is a common measurement criteria for OPT's. This however does not tell the whole story. There are several small transformers (like the little Edcor) that have excellent frequency response. Even at full power the low end response goes down into the 20 Hz region. In listening tests it is obvious that the small transformers can't deliver wall shaking bass like the big ones can. I spent some time looking for an electrical test that can quantify this ability.

I found that distortion VS power curves ran at several different frequencies can do it well. The 1KHz curves are the baseline. In the ideal world the curves at all other frequencies in the audio spectrum should be identical. In the real world the iron in most transformers will saturate if pushed hard at low frequencies and high power levels. This will show up as distortion on the low frequency curves. Also the high frequencies may be distorted by excessive capacitance, and magnetic losses. Since the amplifier remains unchanged from transformer to transformer, you can learn about the relative efficiency of each transformer by comparing a common point, say how much power can I get at 5% distortion at 1KHz. The larger transformers eat up more of the valuable power in magnetic and resistive losses.

The largest transformers tested were the Hammond 1628SE, 11 pounds of iron and copper here. These are the older 1628SE's, NOT the recently released 1628SEA. I have the new ones on order, but they haven't arrived yet. 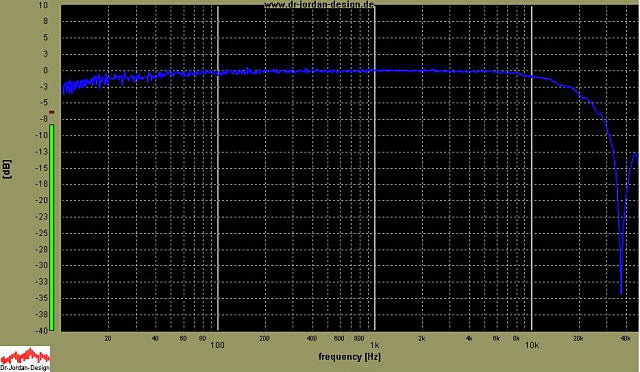 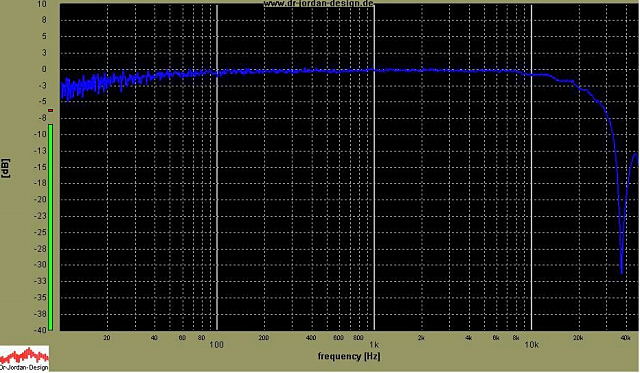 Cathode feedback improves this to 2.7 db. 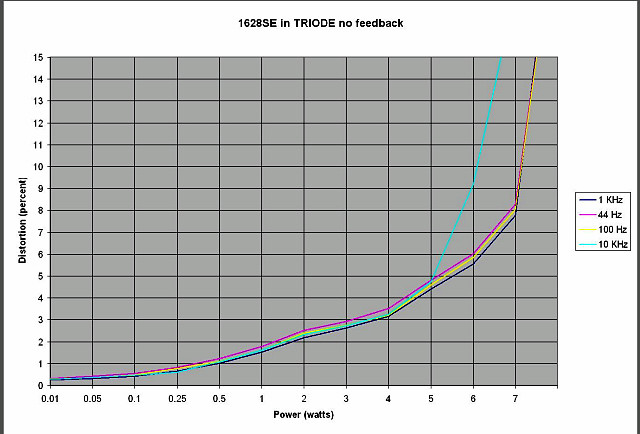 This is a graph of distortion VS power at 4 different frequencies in triode mode with no feedback. The increased distortion at 10 KHz above 5 watts should not cause a problem with music. This transformer shows 4 curves that are very similar up to 5 watts. 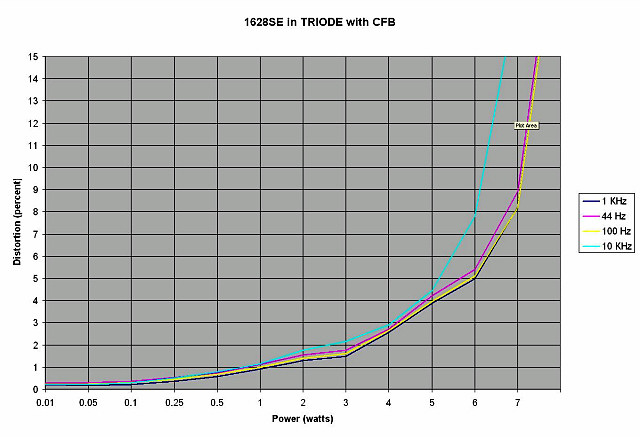 This is a graph of distortion VS power at 4 different frequencies in triode mode with cathode feedback. Cathode feedback improves the distortion slightly especially at low power levels. The distortion remains primarily second harmonic up until the onset of clipping (about 4.8 watts). 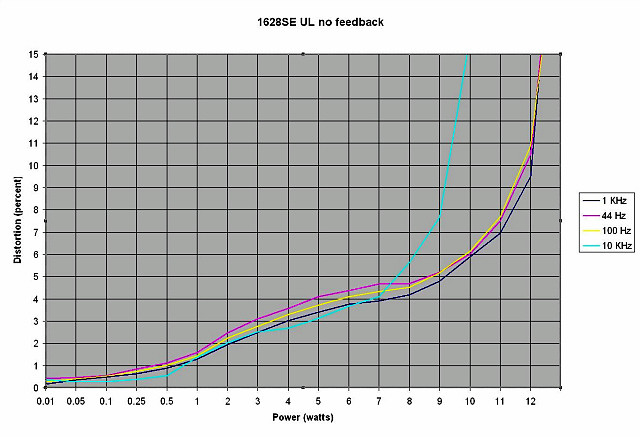 This is a graph of distortion VS power at 4 different frequencies in UltraLinear mode with no feedback. 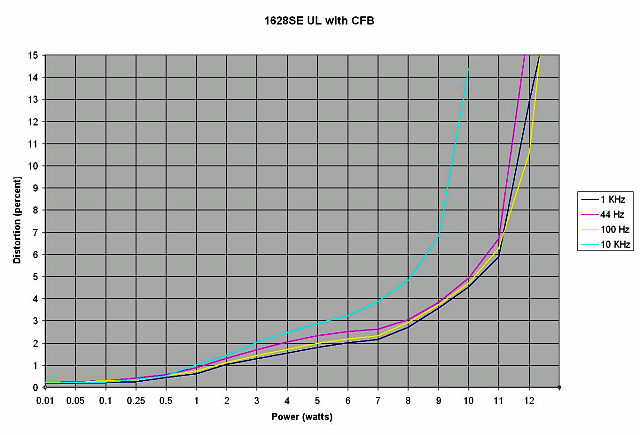 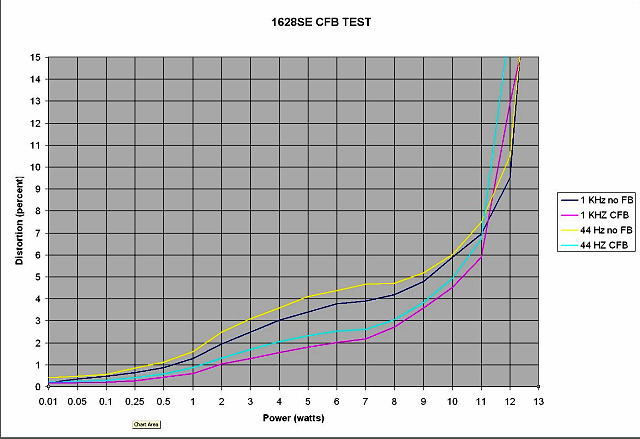 This graph shows what cathode feedback does for this transformer at two frequencies. The blue and magenta curves are 1KHz. The yellow and cyan curves are at 44 Hz. This graph is made from the same data sets as the graphs above. It just graphically displays the improvements in distortion afforded by CFB.

These are almost the same size as the Hammond 1628SE's, but they don't have as many laminations so they are not as heavy. 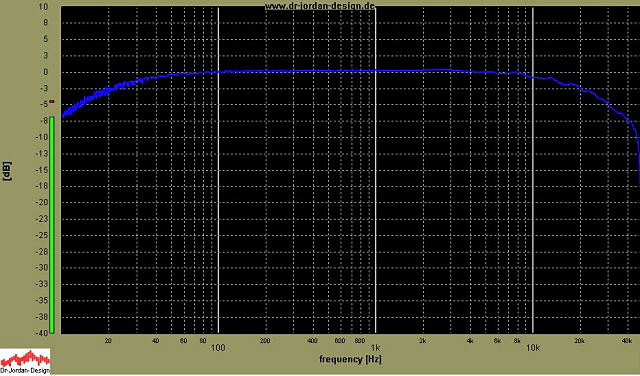 The -3DB response here is well centered over the audio band. This plot was taken in UltraLinear mode at 5 watts with no feedback. Triode mode looked the same. 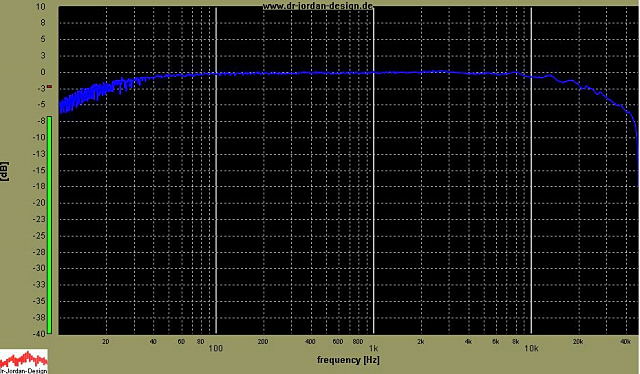 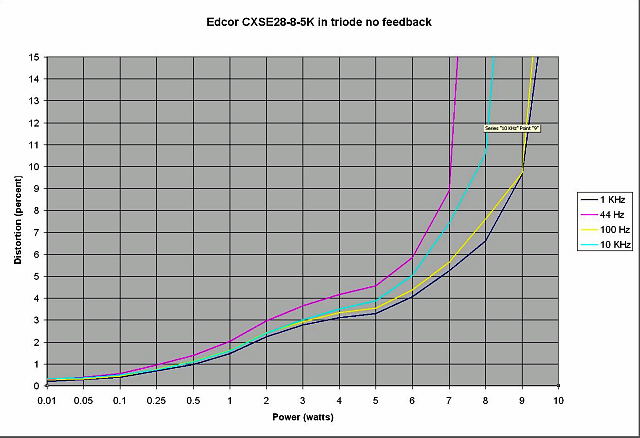 This is a graph of distortion VS power at 4 different frequencies in triode mode with no feedback. The increased distortion at 10 KHz is not as bad as the 1628SE. However the 44 Hz curve is significantly above the 100 Hz curve at all power levels. Saturation effects could be seen on the scope at power levels above 7 watts. Note that this transformer offers more power than the 1628SE. The Hammond allows 5.5 watts at 5% at 1 KHz. This one allows 6.8 watts. This is because it is a more efficient transformer (less magnetic losses) and it has a lower DC resistance which allows about 10 more volts on the plate, along with less resistive loss in the transformer. 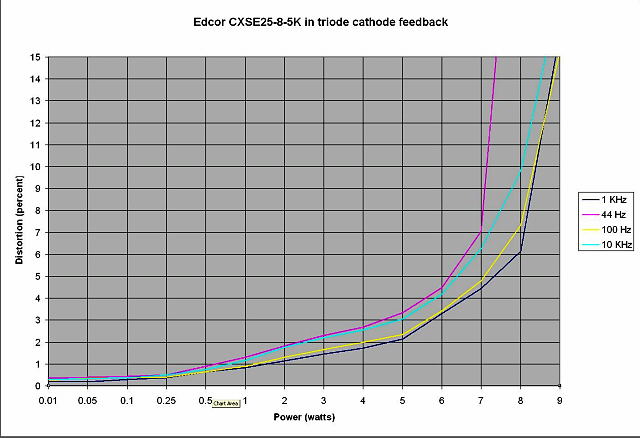 Cathode feedback was applied to this transformer in triode mode. It offers more improvement than it does with the 1628SE. CFB helps lower the distortion produced in the tube, it can't do anything for the magnetic saturation effects seen at 44 Hz above 6 watts. I can now get over 7 watts at 5% distortion. 7 watts in triode mode is a lot for a 6L6GC! 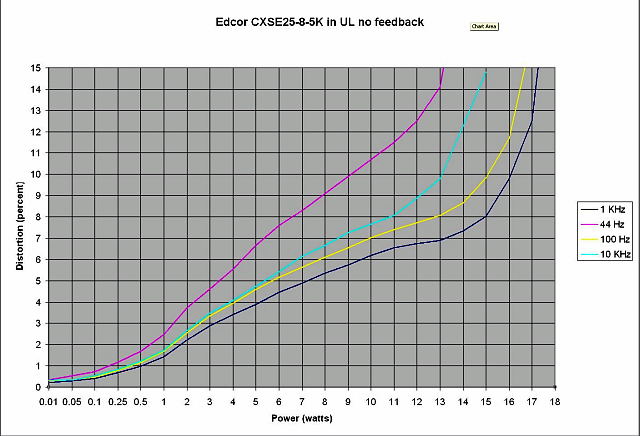 This is a graph of distortion VS power at 4 different frequencies in UltraLinear mode with no feedback. Note considerably higher distortion at all frequencies than the Hammond 1628SE. 44 Hz is particularly bad. 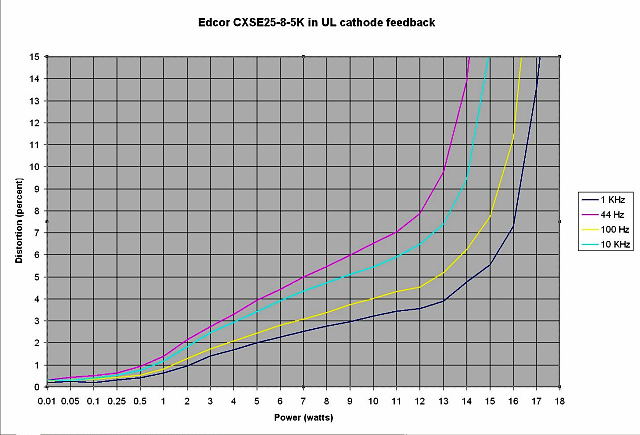 This graph shows what cathode feedback does for this transformer at two frequencies. The blue and magenta curves are 1KHz. The yellow and cyan curves are at 44 Hz. This graph is made from the same data sets as the graphs above. It just graphically displays the improvements in distortion afforded by CFB. Compare the improvements here with the CFB chart on the 1628SE. Listening tests reveal similar behavior.