After I reported on the 6AV5 and the success that I had operating some of them far in excess of the ratings. A thread appeared on the diyAudio forums:

That number sounded familiar, so I looked in the warehouse and I have about 50 NOS 6CD6 and 25CD6 tubes. I also had a lot of used ones in the assorted sweep tubes collection. I brought a few of each kind home for experimentation. I brought home 6 used 6CD6GA's each one with a different internal construction. I have a Tung Sol that has a monstrous plate assembly that looks like they borrowed it from the 6550.

The setup was still on my bench from the 6AV5 and 6LW6 testing, so I rewired the sockets to accept 6CD6's and plugged them in. The whole thing is connected up to a variable power supply so that I could test at any voltage up to 400 volts. I used the same Edcor transformer so I could use the UL tap.

The short story is that the screen grid is FAR more sensitive than the one in the 6AV5. It does begin to glow at at voltages over 250 to 300 volts depending on the individual tube. The Tung Sol was the worst. Glow was visible at 250 volts. All of the tubes were visibly upset at any screen voltage above 300 volts. I tested triode, and UL up to 300 volts and 80 mA. The power at 5% distortion was similar to the 6AV5.

Using a 4 ohm load on the 8 ohm transformer (2500 ohm load) caused increased distortion at any power level. I ran the same tests and came to the conclusion that this tube would not be suitable for triode or UL connections due to the hypersensitive screen grid. I think that this tube would be a great candidate for a screen drive experiment, but I have not tried it yet.

Was there any way to use this tube in triode or UL mode?

I got this idea that if I could run UL at a reduced screen voltage that this tube would rock, so I wired an 0A2 in series with the screen grid. Well this doesn't work too well in triode strapped mode because the plate voltage drops low enough to cause the 0A2 to go out on current peaks, causing a whole screen full of distortion products (FFT analyzer). In UL mode this trick allowed 12.4 watts at 5% distortion with 400 volts on the plate (power supply maxed). I tried currents from 50 to 100 mA. 100mA is 40 watts, and the Tung Sol had no visible glow with the room lights off.

Due to the same effect described above (0A2 going out) the distortion comes up quickly when you hit this point. I had 12 watts at 2.5%, 12.4 watts at 5% but at 12.6 watts there is 12% distortion, really ugly nasty sounding distortion. It did sound good up until the point of distortion though. A resistor from the screen to a negative supply could fix this. 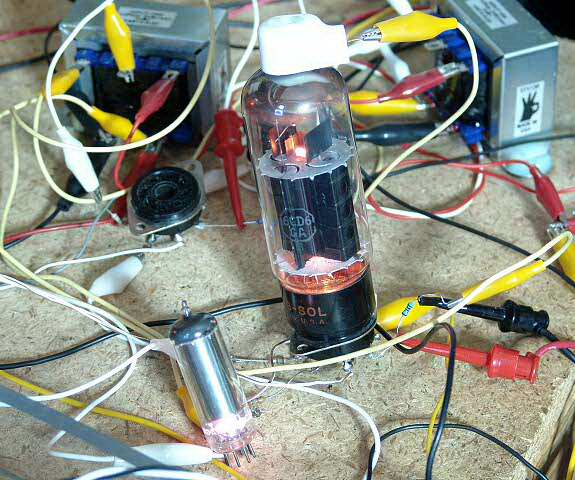 This could definitely be considered UNSAFE. Don't even think about this type of prototyping unless everyone in the room understands the hazard and the risks involved!

Check out the massive plate in this tube, It wouldn't glow even with 40 watts of dissipation. With the right circuit this tube could ROCK! Here is the very hastily constructed 6CD6 SE in UL mode with an 0A2 wired in series with the screen grid. This idea has enough merit to warrant further investigation. There are a few (very few) output transformers with a separate screen winding, that allows operating G2 from a separate (lower) screen supply. For those of us who don't have one, I am working on a circuit that shifts the screen voltage with a mosfet, but I haven't had time to experiment.

I will try these tubes in my screen driven P-P test amp in the near future, but I need to find two that are the same. I have a bunch of NOS Dumonts (Sylvanias) in the warehouse, I won't be over there until next weekend.