I discovered the 6LW6 tube back when I worked in TV repair (1970 or 1971). It was simply the biggest sweep tube that I had ever seen. I went on to work in the solid state world, and mostly forgot about tubes. 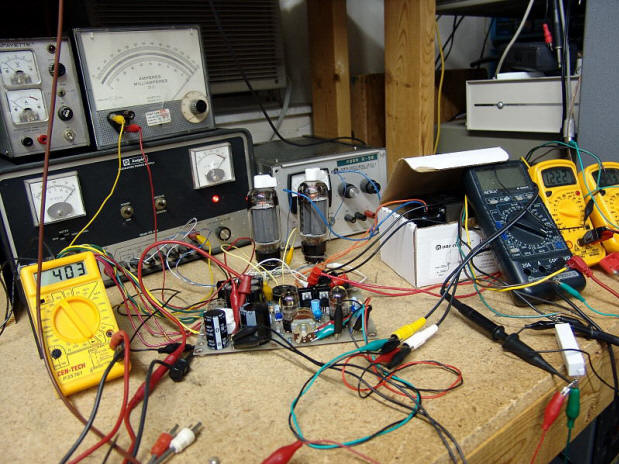 I briefly used this tube again when I played with RF amplifiers in the mid 1970's. It was easier to find octal sockets than the compactron sockets for the commonly used 6JE6/6LQ6. The 6LW6 also put out more RF power. I used the 6LW6 to make a seriously wicked guitar amplifier In the late 90's. I started collecting these tubes (among others) when Ebay started up. You could often find them for under $5 each. In 1999 an article appeared in Glass Audio magazine that showed the construction of a 90 watt per channel HiFi Stereo amplifier using two 6LW6 tubes per channel. This article unfortunately caused the end of the $5 6LW6 tube. Now they go for up to $25 each, although I have still found them far cheaper occasionally.

In this experiment I wired a pair of 6LW6's into a Tubelab SE amplifier in triode mode. I used an adjustable power supply to allow operation from 0 to 400 volts. The maximum screen grid voltage spec is 275 volts. That turns out not to be a problem. The tube handles 400 volts without cracking a sweat. I have run the bias up to 125 mA per tube without any signs of distress. I can get 15 watts at .8% distortion with a 1500 ohm load on the tube (8 ohm load on the 16 ohm tap). The single stage driver in this board does not have enough gain to drive this tube to clipping. Bass is the best that I have heard come out of my small speakers. Note that all meters are slammed to the right, this amp wants more voltage, and more drive, I ran out of both. Further experiments are planned.