Note: This board is no longer available. The TSE-II is coming soon. It has the same audio path, but a different filament regulator, since the Sharp regulator is no longer available. A list of minor improvements had been gathered from previous builders and has been incorporated. The board is slightly larger with more space between the output tubes and heat sinks. It should be available April 2019.

This is an improved version of the Simple 45. This design has been committed to a PC board for reliable and easy construction. That project is known as the Tubelab SE Board. This board (in the amp shown below) can be used to build a complete SE amplifier, including the power supply. 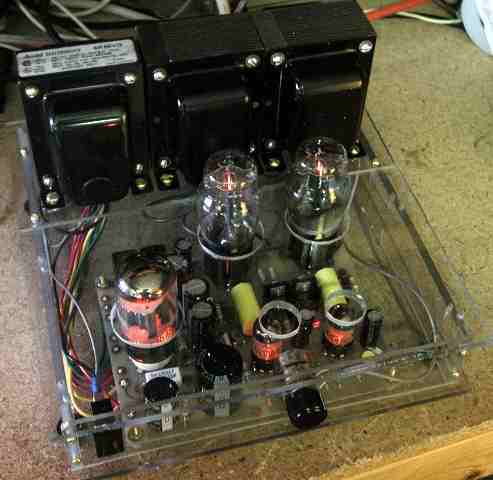 How was this photo taken? Turn off the room lights. The only light is from the computer monitor and the lights in the next room. The camera is placed on a tripod, and a time exposure taken. The resulting picture will be dim and lack contrast. Use your imaging software (I use Nikon View 6.0) to adjust the brightness and contrast. This trick makes the filaments look really bright. I did the same thing with the 845 SE picture, but the 845's light up the room all by themselves.

Here is the schematic for the amplifier portion of the Tubelab SE. You will see that it is similar to the third version of the Simple 45. There are only two improvements since then. A potentiometer is added across the cathode resistor of the 5842. This is used to compensate for tube variations. This allows the bias on the 5842 to be adjusted to put the tube in the most linear portion of its curves. The major improvement is the addition of the MOSFET at the grid of the output tube. This turns out to solve a lot of problems that have been present in vacuum tube amplifiers forever. For a detailed explanation of this issue, see the PowerDrive page. Some component values have been tweaked since the original design. These come from building and listening to seven of these amplifiers with a variety of different output tubes and transformers. 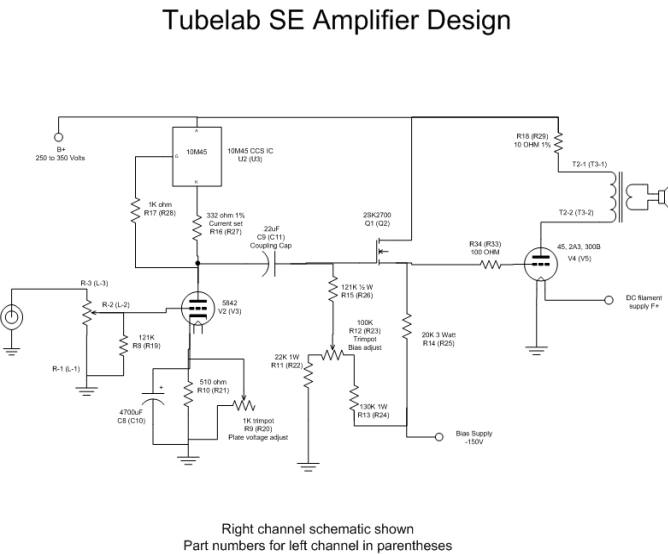 The circuit looks complex, but it can be broken down into small pieces.

The input stage (5842) is a simple common cathode amplifier. If you ignore the three parts (the 10M45 chip, 332 ohm and 1K resistors) where the plate load resistor belongs, it looks like any other common cathode amplifier. These 3 parts create a CCS (constant current source). A CCS passes a constant amount of current regardless of the applied voltage. In this case it is 12mA, set by the 332 ohm resistor. A constant current is the ideal load for a triode. By using a CCS the stage gain goes way up and distortion goes way down. I have tried various vacuum tube and solid state CCS circuits. Very few work as good as this, and they are much more complicated.

In many amplifiers the coupling capacitor is simply connected to the grid of the output tube, and a high value (100K up) resistor goes from the grid to the bias network. The evils of this arrangement were documented by Norman Crowhurst over 50 years ago, yet this continues to be a popular design. Just look up the schematic of your favorite 6SN7-300B amp. Several engineers have tried to overcome this problem with novel circuits. The two most common are the interstage transformer and the cathode follower. I have experimented with these circuits, but have found that a MOSFET follower simply works better. The purpose of any of these circuits is to present a high impedance load on the driver and a low impedance source to the grid of the output tube. I called the combination of the CCS and the MOSFET, PowerDrive, for lack of a better name, and in reference to its function. More details are on the PowerDrive page.

The output stage is conventional with two exceptions. The grid resistor is much lower than normal. PowerDrive allows this, and the output tube likes the lower resistance. The other exception is the use of DC on the filament. Most "experts" state that DHT's sound better with AC on the filaments. In my testing I found a vague haziness in the sound. I could not hear any hum, but something wasn't right. When I got the FFT analyzer it became obvious. Even though I could null the 60Hz hum out with the balance pot, I was getting intermodulation products from the 60Hz. In other words when you ran a 1000Hz tone through the amp, you got 1000Hz, and 1060Hz and 940Hz out of it. These intermodulation products were not strong, but caused an annoying fogginess to some music. I substituted a DC power supply for the filament transformer and all of this just went away. The final design uses DC for all of the filaments. This has been tried with dozens of tubes of several types, mostly 45's, 2A3's and 300B's.

The on board power supply uses FRED diodes for the bias (negative) voltages. This allows fast startup of the bias supply. The plate (positive) voltages are tube rectified. A 5AR4 is recommended because of it's slow warm up characteristics. This allows all of the amplifier tubes time to warm up before the plate voltage is applied. The plate supply can be choke or capacitor input. There is room for a large power supply cap if you want one (to the left of the volume control), although it doesn't seem to make much difference. Provisions are made for an external bypass capacitor from the B+ side of the output transformer to the output tube filament (ground). An oil cap or a Solen Fast Cap may improve the sound. My new amps use ASC motor RUN caps for the supplemental cap (100 uF 370 VAC). All filaments run on DC, there is no audible hum. There is a voltage regulator to assure that the DHT's receive the correct filament voltage with very low ripple. If it seems that considerable time was spent on the power supply, you are right. The power supply is an integral part of the signal path in an SE amp. 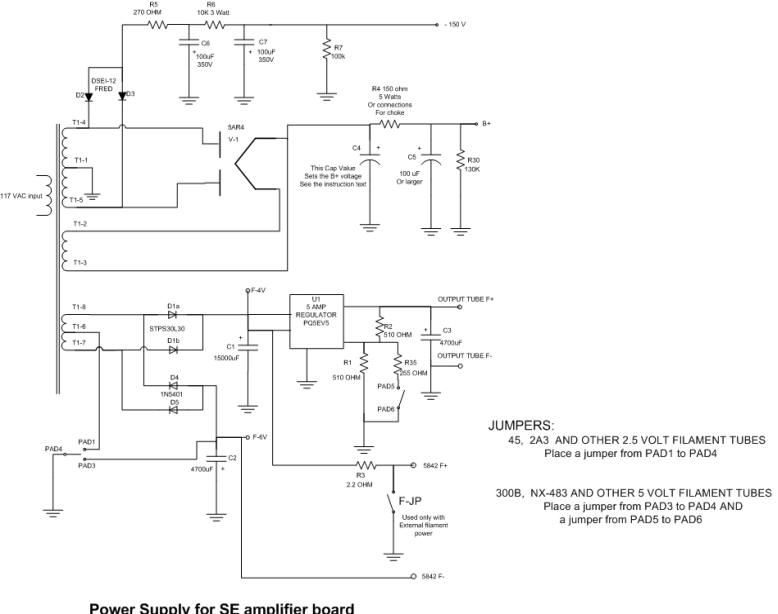 The filament voltage can be set to any voltage from 2 to 5 by changing a resistor value. Jumpers are provided for dual voltage (2.5 or 5 volt) operation. 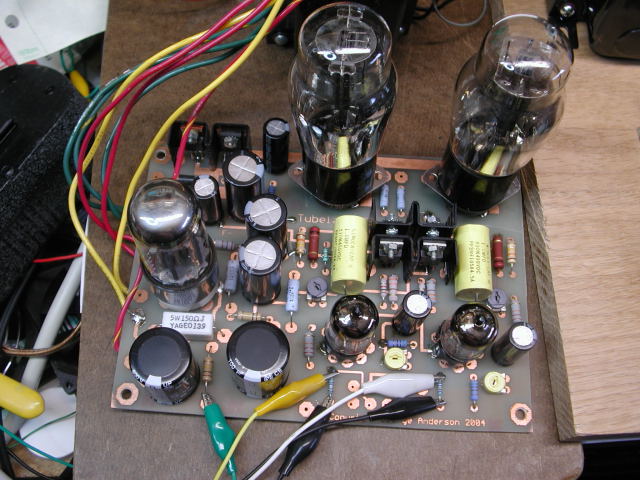 Here is an early prototype board being tested

At first this design was just the platform to build something bigger on. I didn't think that I would have any use for an amplifier that only put out 2 watts. I recently built a vacuum tube amp that puts out 250 watts per channel. It uses 4 6LW6 tubes per channel running on 750 volts. I have a solid state amp sitting under my bench (waiting to be fixed) that claims 2000 watts, what do I want with 2 watts. After I connected it into my system, I now know what all of this single ended craziness is all about. I liked what I heard, so I built more of them. There are Tubelab SE's that use 45's, Tubelab SE's that use 2A3's Tubelab SE's that use 300B's.

I have tried several types of output transformers. The Electra-Prints are by far the best that I have tried. I have used the low cost Hammond 125CSE. They don't sound all that bad except for in the bass department. These would be OK if you were using a subwoofer. The Hammonds work great for a headphone amp using 01A's or 30's. I have also used a pair of the Schumaker push - pull transformers that are currently being sold on Ebay. They work OK, but they sound much better if you take them apart, and reassemble the laminations with an air gap. I used a piece of masking tape to set the gap.

I am currently building a few more of these amps to verify the assembly manual. One is using One Electron UBT-3 output transformers and Shuguang 300B's. Another is being used to develop a powered parafeed circuit using a constant current source instead of the usual choke. This allows the use of ANY type of output transformers. I plan to try several different transformers including UTC LS-57's.