This amplifier was made by Chris in Australia. It was his first tube amp build. I think it looks very nice for number 1 and I can only imagine what he will build in the future. I saw his pictures of some awesome looking DIY speakers on one of the forums. He sent me 4 very good high resolution pictures, which I had to reduce to fit the web site. His words:

I am running all JJ tubes, GZ34, ECC81 and E34Ls. Hammond 374BX power transformer, Hammond 193H 5H 200ma choke, Hovland Musicap caps, 80uF motor run cap and Edcore XSE15-8-5K output transformers. There is some hum, but I must place my ear just about inside the speaker cone to hear it and it is certainly no worse than the quietest solid state amp I have built. The amp sounds great, I think I like the sound of triode mode with cathode feedback best. The 6-7 watts seams to be ample except for choral music at very high volumes. So far I am very happy and intend to leave the amp hooked up as my main amp.

I am very happy with the result. Your board and design have enabled me to dabble in tube audio in a way that does not require a huge investment (used the Edcore budget transformers) and pretty much guarantees a good result. My friends and kids are pretty impressed with the cool retro industrial look and also with the quality of the sound.

After using his amplifier for a while, Chris changed his opinion slightly:

Just writing to give you a little feedback on my completed amp. I noticed that you have placed my amp on your "completions" page. Reading my comments, I feel that I may have done you a little disservice. I stated " There is some hum, but I must place my ear just about inside the speaker cone to hear it and it is certainly no worse than the quietest solid state amp I have built."

I have just re-arranged my hi-fi set up, and I realise that I had set my system up pretty poorly when I first hooked up my [SSE], coiled power cords next to interconnects, the whole nightmare... Anyway, after sorting things out properly I placed my ear next to my speakers and I thought that the amp must be turned off, as there was no hum. Checked, amp was on! Had to place my ear less than an inch from the dust cap in the speaker cone to even perceive that there was any hum at all. It was my slap-dash setup causing most of the noise, not your amp! I think my original words might lead people to believe that this amp has some hum, when it is actually the quietest amp I have built. I also presume that it is probably my amateurish wiring in the chassis that is making what little detectable noise there is, not your design 😉 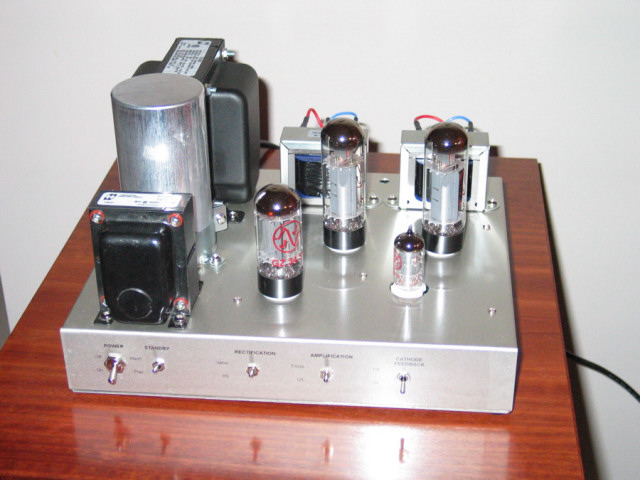 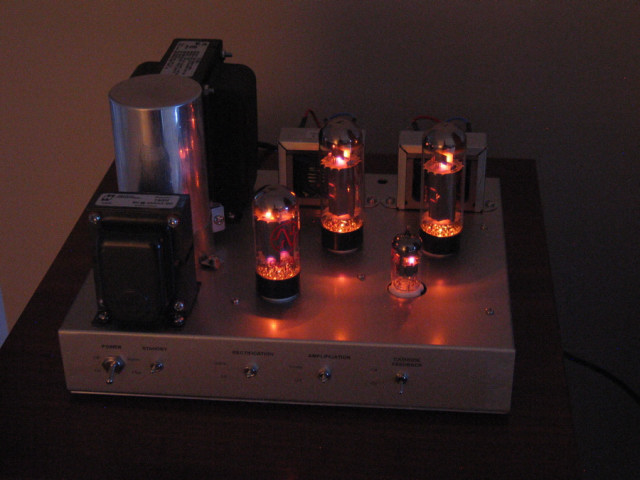 It glows in the dark! 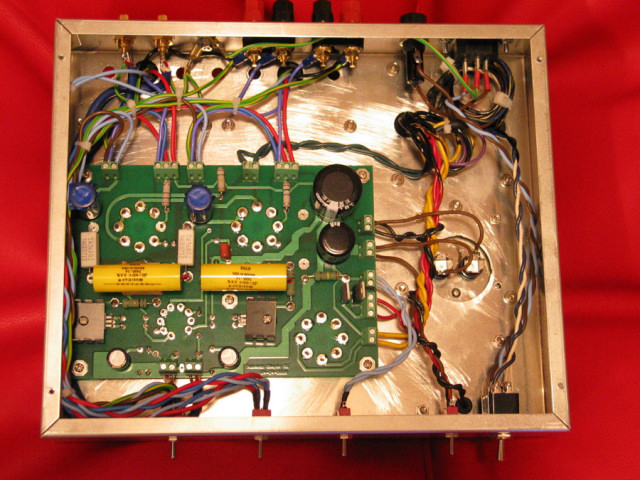 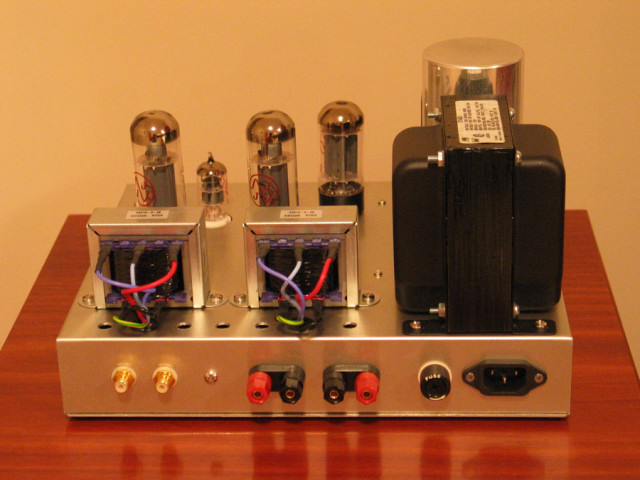 I received the following pictures from another Tubelab SSE builder. Unfortunately the text that came with them was lost when my in box overflowed with spam. 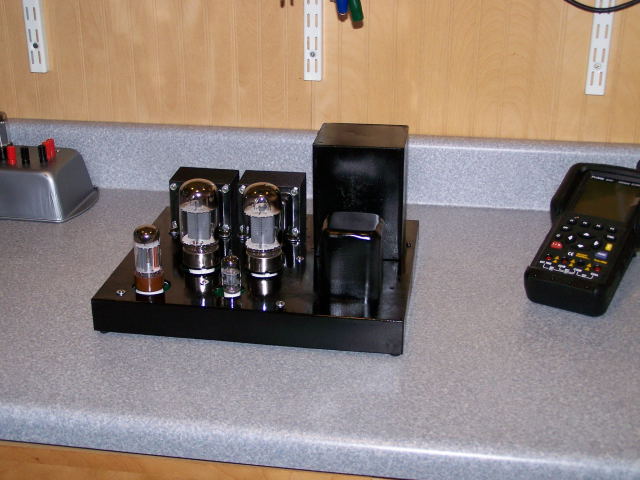 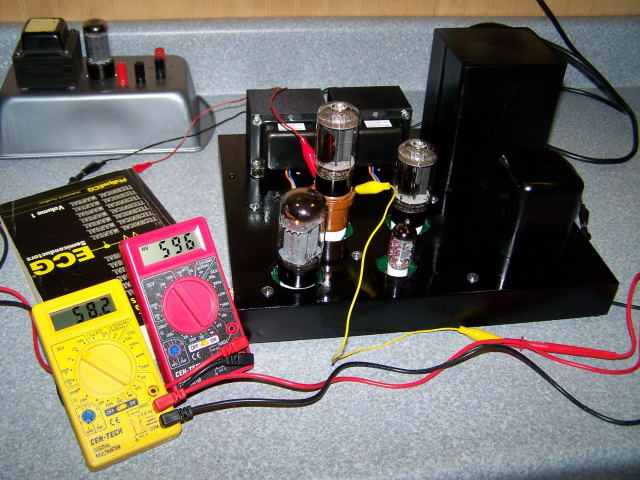 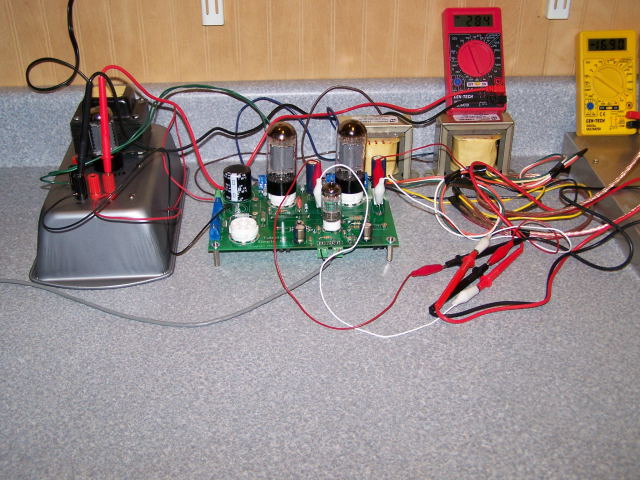 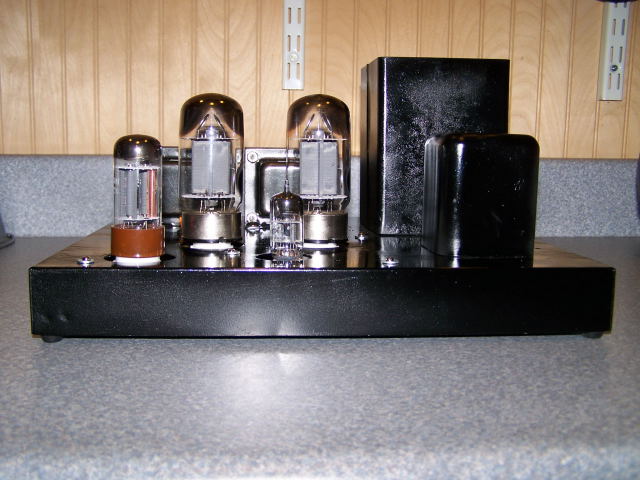 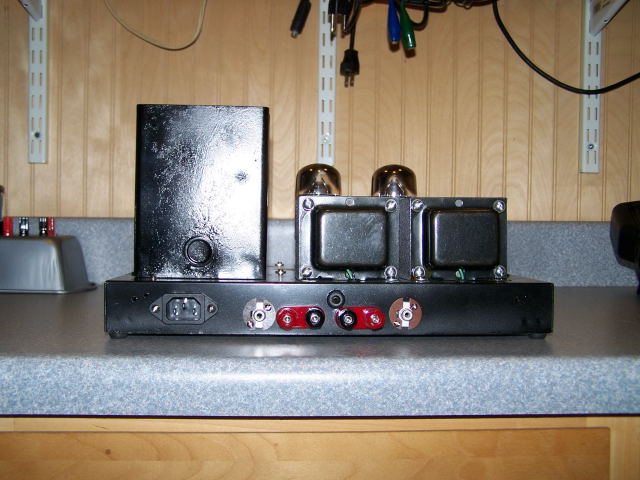 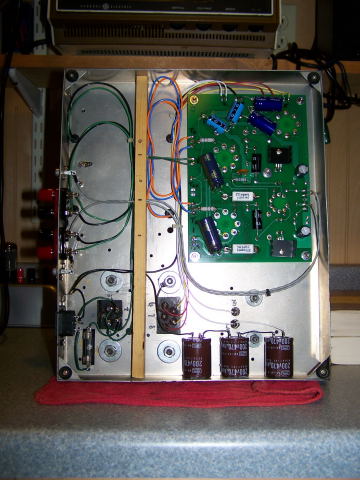 I received an email from a user in the USA who took his SSE to a gathering of audiophiles in San Fransisco. He sent the following:

I don't know if you were aware of the DIY audio gathering dubbed "Burning Amp" that was held in San Francisco yesterday. The first systems that were played for the large crowd featured large, multi-amped speakers, some with very sophisticated DSP crossovers and correction systems. They were able to play very loudly in the big room (an old military base fire house, ~3,000 ft^2 with very high ceilings). Big sound, big dymnamics, very impressive.

Then came my simple, single driver speakers driven by my 6 watt, triode connected [SSE]. I expected them to be lost in that space, and to play a couple of tracks and slink back off to the sidelines. Instead, both amp and speakers were played for the better part of an hour, and were used to demonstrate a few different front ends (both CD and vinyl). Not only did this simple system produce enough volume and enough bass to work reasonably well in a BIG room, they sounded far better than anyone (including me) expected. The [SSE] more than held its end up. I received many compliments on my system and was awarded a 'blue ribbon' (a pair of handmade machined copper and walnut control knobs) at the end of the day!

Several attendees were aware of your work, and a some had been interested in building a [SSE] before seeing mine. I think you'll be getting a couple of orders from the west coast!

I am attaching a photo of my amp (which I had promised you some time ago!). Thanks again for a good design, and for your support of DIY audio in general. 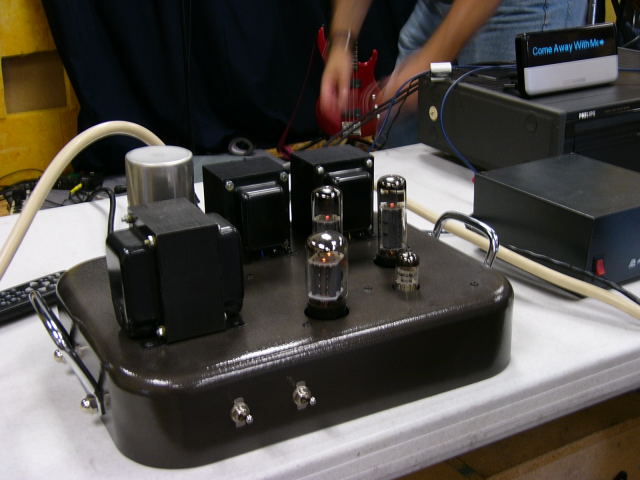 The chassis is certainly unique. It is an inverted baking pan. Check out the thread on the diyAudio forums concerning this festival. It seems that it was indeed a gathering of "who's who" in the DIY audio world. I would like to go next year if it wasn't so far away.

There are pictures of the festival including this amp and Bill's cool speakers (I may have to build some) here: