I found the paper schematic to my “Turbo Champ”. I built a few of these over a two year period about 5 years ago. Each one was slightly different from this schematic, and no two were the same. There were mostly value changes in the tone stack and the feedback circuit. This circuit is offered as an example of how to build a flexible amp. It should work as is, but may not give you the tone that you want. Expect to do some value tweaking. I tweaked every amp individually.

The input tubes were 12AX7's or 12AT7's. Output tubes were mostly "Groove Tubes 6L6" but I used EL-34 and Chinese KT-88 also. Rectifier was 5U4. I built most amps using surplus power transformers and filter chokes scavenged from HP audio oscillators. These amps could use 6V6 and 5Y3 due to lower B+ voltages. The Allied transformer mentioned on the schematic will give you about 450 volts in SS rectifier mode. No wimpy output tubes can be used here. I would recommend a lower voltage transformer. At least one amp was returned because the 470 ohm cathode resistor fried, use a 5 watt part here and a 50 volt cap. 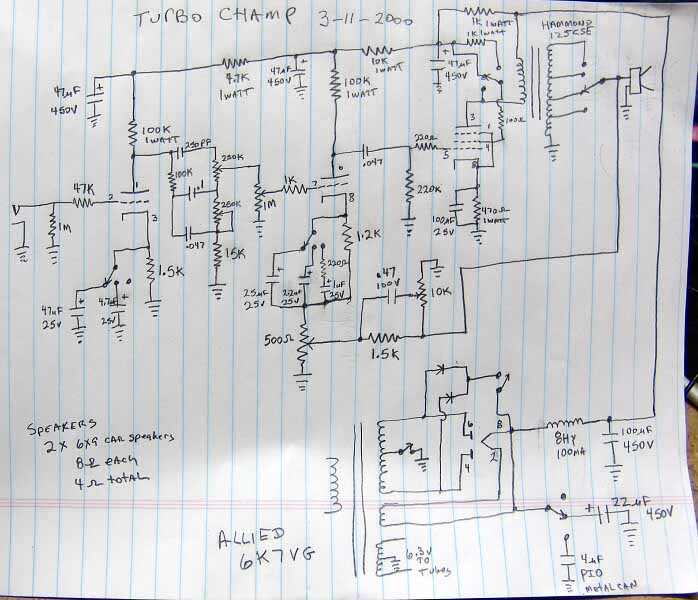 I have used several different speaker setups. The amp is most flexible with a 4 ohm speaker, but an 8 ohm will work. The first amps used a 6 inch Champ replacement speaker. The later amps used a pair of car audio speakers either 5X7 inch or 6X9 inch. These speakers are cheap, take more abuse than this amp can dish out. They have a unique sound. If I am remembering correctly Acoustic used 6X9's in their PA cabinets in the 70's

If you build one there are two important things to remember. Never operate the speaker impedance switch or the screen switch with the amp on. Put it in standby mode.
The power supply has three cap settings and two rectifier settings. Some combinations can produce more voltage than some tubes can handle.

This amp can use a wide variety of tubes, but you must think before you randomly flip switches.

I recently saw one of my old amps and it had more switches on it than this schematic shows. It also had two volume controls. It was one of the last ones that I made. I am trying to talk the owner into letting me take it apart to find out how I made it, since I obviously was not smart enough to document it when I made it.