I built a stereo system for my living room. As with all systems, compromises were made. In this case I need a system that would blend in with Sherri's living room decor, which consisted of a lot of antiques. It would be used for music as well as TV audio. The amplifier must live (and be reliable) in the left hand door of the entertainment center, below the TV. It is currently being built.

I built a set of high performance tube friendly speakers into a matching pair of antique radios. This was done in such a way that the radios could be returned to original condition if I ever choose to. I have enough old radios to do a 5.1 surround system if I ever get so inclined! 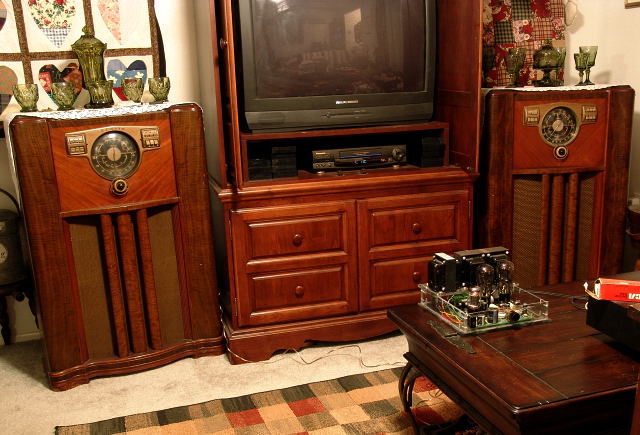 Here the speakers are being tested with a Tubelab SE set up for 1.5 watts per channel. 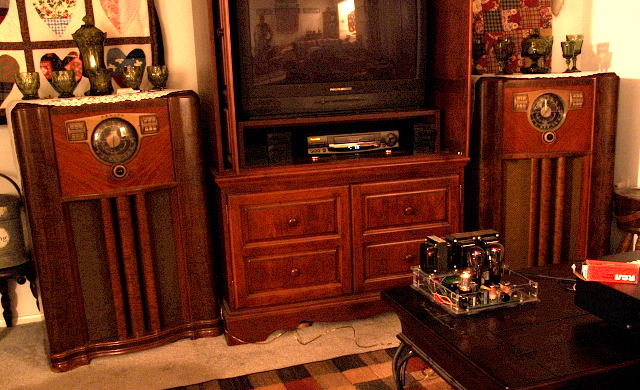 This is the same picture taken with the lights off to show the glowing tubes in the amplifier. At the moment I took this picture I was listening to 45 year old music on 65 year old speaker cabinets through 75 year old tubes. 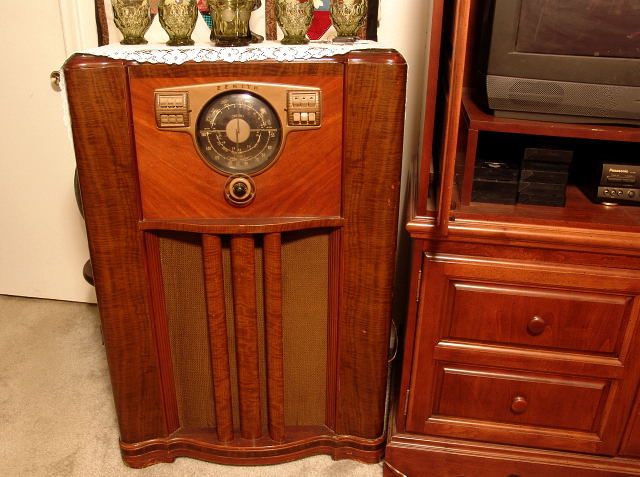 A picture of one of the radios. 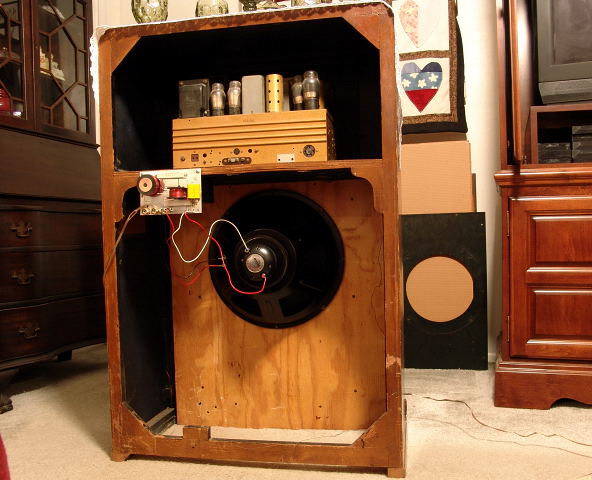 Here you can see what I did. I made a new baffle board out of 5/8 inch plywood. It extends all the way to the carpet, sealing off the original opening across the bottom. The original baffle board is to the right of the radio. It had a 12 inch opening for a 14 inch speaker. I did not want to alter it, so I made a new one. The crossover board is mounted using the holes for the original Zenith Wavemagnet (antenna). The original speaker, antenna, and all of the hardware is stored for reassembly if necessary. The new drivers are Silver Iris from Hawthorne Audio. They are designed for open baffle type cabinets, so they work well in this system. The efficiency is about 96db so they can be used with low powered SE tube amplifiers. I think these cabinets sound very nice with the Tubelab SE amp shown above, but a little more power would be nice, so I am currently building a Tubelab SSE that will live in the door on the left in the entertainment center seen above. I have tested these speakers with the 300Beast (25 WPC) and the 845SE (40 WPC) they sounded great with both amps. The bass was best with the 300B push pull amp, it literally shook the whole house. The 845SE could be heard clearly from the living room in the house across the street. Neither of these amps would fit in the assigned space however. 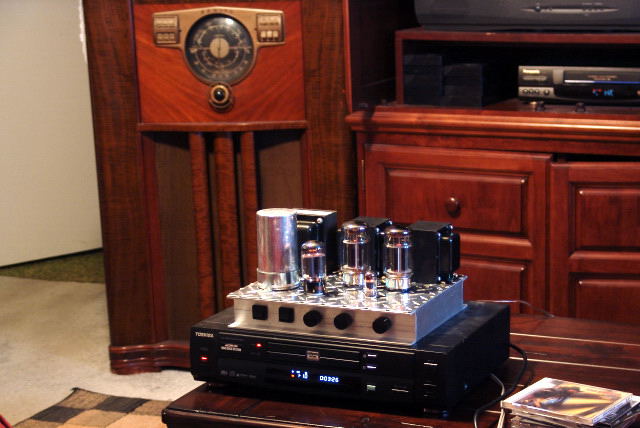 In this picture the speakers are being tested with a Tubelab SSE that uses Electro Harmonix KT88's wired in triode mode. This is the sound that I have settled on and an amplifier with suitable aesthetic appeal is being constructed. It is also an SSE, but UL mode is available at the flick of a switch. It is housed in a cabinet "borrowed" from a Fisher 400 receiver.