When prototyping an amplifier on the Tubelab (or any other breadboard) you need a power supply. For small amplifiers (up to 50 watts total P-P or 20 watts total SE) I use an old Knight kit Regulated Power Supply that I found at a Hamfest for $25. This power supply puts out 0 to 400 Volts at up to 200 mA. It also supplies filament and adjustable bias. Power supplies of this type were made by the thousands during the vacuum tube era by companies like Heathkit, Knight, Eico, Paco, and others. They can still be found at hamfests, flea markets. and on Ebay. This is the simplest solution.

I recently got a Fluke 407-D on Ebay for cheap. This thing is a tank, puts out up to 555 volts at up to 300 mA. This thing can power a monster amp, and I have already overloaded it up to 450 mA without incident. Unfortunately these go for big money, if they are "tested and working", I got this one for $25. No one else bid on it because it was sold "as is". It works. If you can get one cheap, do it!

These power supplies are well regulated, and have a low output impedance. The output is adjustable so you can zero in on the requirements without worrying about the power supply. Then after you are happy with the amplifier's sound, you can begin to design a power supply for it. Too many people buy all of the parts at once and then build the amp and power supply at the same time. How do you know if your power supply is really giving the amp what it wants? With one of these you just turn the knobs to find the amps sweet spot, then read the meters. A friend of mine is still using an Eico power supply to run his SE 45 amp, because it sounds good and because of the tweakability. 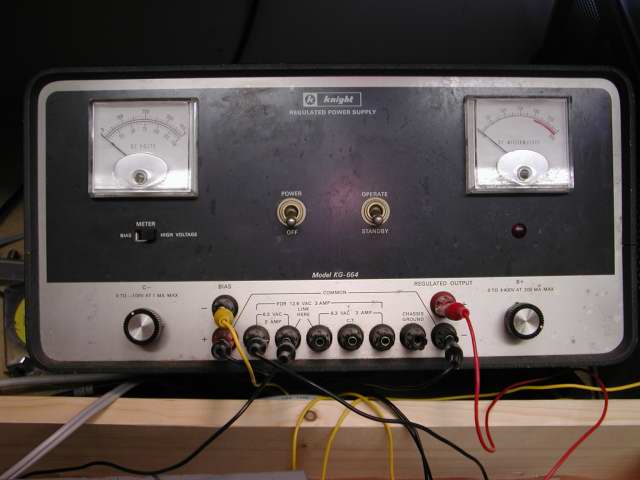 We are using two 600 volt transformers wired in series with a solid state voltage doubler to generate over 2800 volts for our 833A experiments. This kind of voltage is well beyond the transformer's intended breakdown rating. We have all the iron grounded to power line and earth ground for safety. I copied this design from a ham radio friend who has been using a similar power supply in his moonbounce amplifier (vacuum tube of course) for years without problems. This is the power supply that was used to design the 845 SE amplifier. 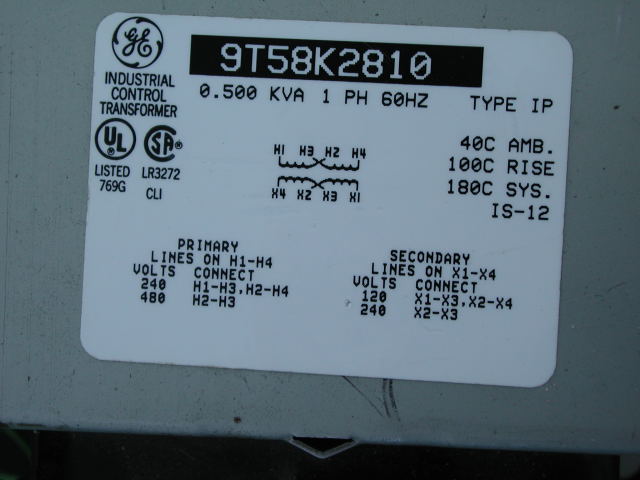 We built our Universal Power Supply using two industrial transformers and a 2.5 volt filament transformer that I got on Ebay for $6. The diodes, capacitors and variacs also came from Ebay. The power supply was built for about $100. We separated the two outputs so that we could experiment with Circlotron amplifiers. This resulted in more flexibility and only requires 4 extra diodes since you already need to series two 450 volt capacitors to get the required voltage rating. 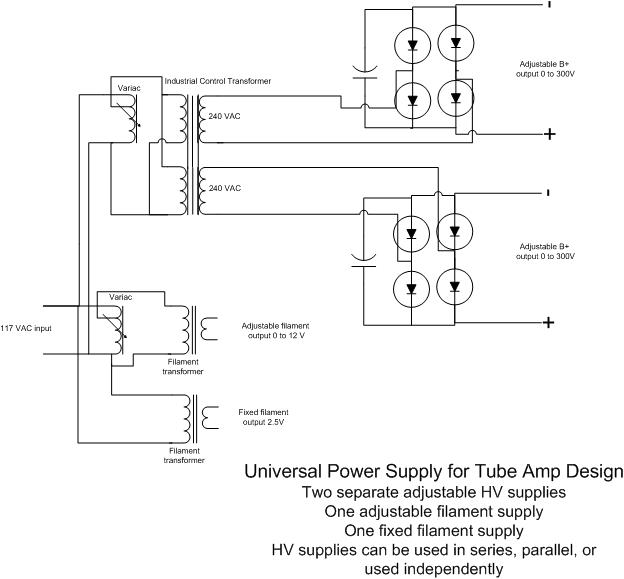 This power supply puts out enough juice to power a several hundred watt amplifier. It is also quite capable of killing you dead! Be careful. The electrolytic capacitors are 1600 microfarads at 450 Volts (also from Ebay). They will blow a small screwdriver in half. I actually get almost 400 Volts from each independent supply (800 volts total) and 14 volts from the adjustable filament supply when they are turned up all the way since the variacs put out 140 volts at max setting. I have found that I must turn the HV all the way down to power this thing on since the electrolytics are so large the breaker on the power strip will blow.

I have been asked about ripple. This power supply was intended for brute force. I never thought about ripple. I built this when playing with circlotrons and totem poles which are relatively immune to ripple. It would be simple enough to add 2 chokes and 2 more caps if needed.

I finally decided that my original version of this power supply was not practical since it was physically too large. It weighed about 120 pounds since I used two 1KW transformers, and two 10 amp variacs. The capacitors resembled Quart sized beer cans. It has been stashed in the warehouse. I will make a smaller version if I ever need it again.